Trustpilot
More Reviews
$30.00 $27.95
(You save $2.05)
You can split your order into 4 easy payments with no added fees by selecting Klarna during checkout.
Write a Review 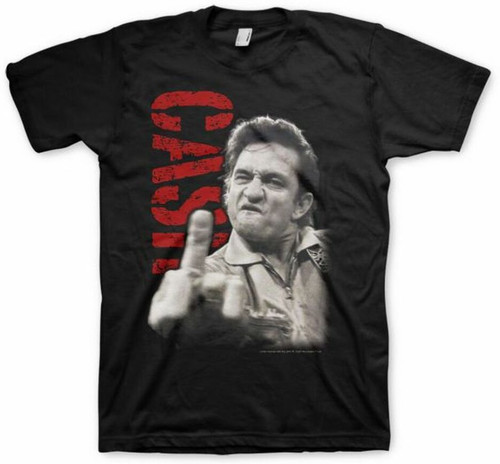 Tell 'em off with this iconic image of Johnny Cash flipping the bird. 100% cotton black tee with the legendary star Cash in full f-bomb mode and CASH in all caps vertically on the side.  The photo was originally taken at San Quentin Prison in 1970 where JC performed for the inmates. Photographer Jim Marshall asked JC to "do a shot for the warden".  It remained obscure until 1998 when JC took out a full-page ad in Billboard to "thanking" country music radio and the Nashville establishment which had virtually ignored his recent album. Although "going viral" had not been invented yet, the image became famous with fans and other country artists who felt the same way. There are lots of reasons to love this shirt, so buy it now!
Fabric Details