Trustpilot
More Reviews
$26.00 $22.95
(You save $3.05)
You can split your order into 4 easy payments with no added fees by selecting Klarna during checkout.
Write a Review 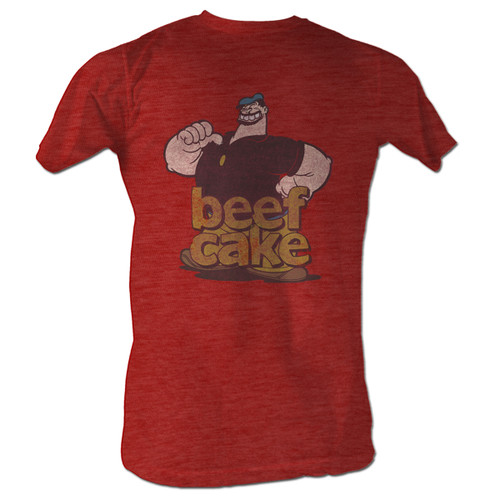 This licensed Popeye shirt features a vintage image of Bluto proudly referring to himself as "Beefcake". Bluto, was Popeye's biggest and original nemesis.He was very similar to the Brutus character that appeared in later animated episodes of Popeye the Sailor.  Popeye was one of the most popular comic strip characters of all time and later became even more popular with his animated TV show in the 1960's. Most Popeye episodes went like this: Bluto harasses Olive until Popeye notices her plight and tries to come to her aid, but at first he fails, then under the influence of spinach he whoops himself some Bluto butt and saves the day, and finally he sings his song and toots his pipe. This is a vibrant red t-shirt on soft 60% cotton, 40% polyester fabric.

Popeye Strong to the Finish T-Shirt